The following article was written by Lori Berglund, a free-lance writer with Big Green Umbrella Media, about Central Gardens for Clear Lake Living in 2012.

The news would have spread quickly around the lake. There was no need for a Twitter feed: this news spread like wildfire.

It was devastating news, indeed, for a community that must have worked so hard to build a school so beautiful. Central School was no doubt the pride of Clear Lake when it burned in 1912, exactly one century ago this year.

For a community that was still so young, it’s hard to fathom today the extent of the loss felt by the people of this town when this daunting school with its Romanesque arches was devastated by fire.

But all was not lost: the community came together and built a new Central School that would serve the students of this lake town for most of the new century.

Let your mind wander back in time for a few minutes and consider all that happened in those hallowed walls of the new Central School. There are stories to tell here.

The school was new when the “Doughboys” marched off “Over There” in World War I. The boys and girls, young women and young men, who knew this school best were here when the stock market crashed. They were her when FDR spoke to the nation on the day after Pearl Harbor. They were here when news spread that a young president had been shot while riding in a motorcade in Dallas.

The stories are endless. But the school is gone, its labor done, still the stories continue in this special place.

Today, this full city block on the corner of North Eighth Street and Second Avenue North is home to Central Gardens of North Iowa, named in memory of the school that stood here so long. Central Gardens, like the old Central School, is a bit incongruous, in that it is both busy, and yet quite serene; it is historic, and yet it is firmly planted in the future. 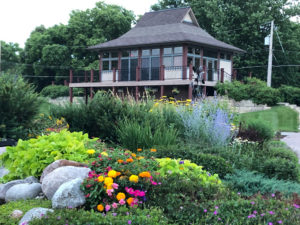 And it’s also just a whole lot of fun.

Moran is one of the many volunteers who make this privately-funded garden a glorious place for the public to visit. During a recent Fresh on Fridays celebration at the Gardens, Moran had found a quiet table to sit and work, creating flowers for the top of a wedding cake.

“I’m involved with doing the food for Central Gardens, so I thought while I was doing that I could also sit here and make flowers. It’s a beautiful place to sit and work,” she explains.

The wedding was to be the following day in another location, and, while Moran sat and rolled the sugared flowers, she had time to chat with friends gathers around her table. Joining her was Linda Sorenson, another volunteer at the Gardens. She assists with planning the art feature on the second Friday of each month, as well as the Recycle, Repurpose and Reuse feature on the fifth Friday of the month.

On this particular Friday, Paul Weitzel of Mason City was singing and playing the guitar as guests sipped lavender lemonade (with lavender fresh from Moran’s garden) and munched on chocolate-dipped strawberries. On other Fridays, guests will find artists bringing canvases to life or demonstrating the art of making dried flowers. Even knitting groups have been known to come and share their artistry as the needles fly.

Recycle, Repurpose and Reuse, held when there is a fifth Friday in the month, is particularly fun, as Sorenson shows have to turn ordinary junk into outdoor art pieces. (Hint: Colorful old bowling balls make great reflecting balls on farms where the open wind is notorious for sending ordinary balls into the next county.)

“In my own gardens, I have a lot of repurposed items, like an old wagon, a sewing machine and just a lot of things,” Sorenson says. “I’m a farm girl so I have a lot of old containers, feed buckets and things like that.”

Fresh on Fridays is one of several special events held regularly (8 a.m. to 11 a.m. Fridays) throughout the summer at Central Gardens. But it really doesn’t take a special event to make it a special day at the Gardens. Mary Paquette-Abt of Detroit was in town recently to visit with her mom, Joyce Paquette, and found herself absolutely delighted to share a mother/daughter stroll through the Gardens.

“This is quite a surprise,” says Paquette-Abt. “It’s absolutely lovely.”

While her mother, Joyce, spends summers in Clear Lake, she hadn’t been to the Gardens for at least a year or more and was impressed with how the place continues to grow and mature. Both mother and daughter agree that to fully experience the Gardens, one has to take the time to get inside them.

“It doesn’t reveal itself from the street,” says Paquette-Abt.

Indeed, Central Gardens is a actually a series of “secret gardens,” that have been described as “pearls on a string,” one gem after another creating a jeweled piece that is greater than the sum of its parts.

“At first when you come here, you think it’s just a beautiful garden, but then you learn the story that there are 22 gardens, and there’s sort of a pattern throughout the garden from earlier times, to native American times, to Victorian times, and so forth. It’s just a cool story to learn,” says Alex Klus, a Mason City native who has been volunteering at Central Gardens as an Iowa State intern this summer.

The Landscape Architecture major is impressed with how Central Gardens was planned and designed. She sees a garden – any garden – as a place that can tell a story or not, depending on the experience of the person viewing the garden.

“It’s really whatever the person walking through the garden wants to learn,” she says. “It’s up to the viewer, I think. You can design with intent,” or you can simply create an experience designed for relaxation.

Donna Dull, one of Central Gardens most ardent volunteers and benefactors, knows the stories of the 22 gardens very well. One of them is her “mother’s garden.”

“I was not a gardener. It was my mother and grandfather that were gardeners,” she says. “But I have found that for me, it’s one of the best places to talk to God.” Dull honored her mother’s love for gardens with a plaque in the garden that reads, “In search of my mother’s garden, I found my own.”

But Dull has created a legacy also designed to help Central Gardens grow into the future. The MEWS Building (Mother Earth’s Workshop) was built in 2011 and will be completed this year with the addition of a small greenhouse.

Dull sees the MEWS Building as one of the more practical gifts to the garden, creating storage and workspace that was desperately needed. In addition, it {has} public bathrooms and a drinking fountain that had not previously been available.

“I was glad to be able to give back to all the people who have given to me,” Dull says. “I feel like I got a lot from the City of Clear Lake, and now I’m giving back.”

Perhaps it’s fitting that this former school site is benefitting from the generosity of one of the city’s longest-serving teachers. Dull spent 41 teaching kindergarteners, 39 of them at the former Lincoln School in Clear Lake. She’s looking forward to reading to kids at the Gardens later this summer.

“That’s probably what I miss the most. I love to read stories to boys and girls,” she says.

And she also loves to look around and see the joy that Central Gardens gives to its visitors.  On an early summer day, a family from Cedar Rapids, vacationing in Clear Lake, was letting the kids run and burn off some energy at the Gardens. They make a point to visit the Gardens each year when in Clear Lake. 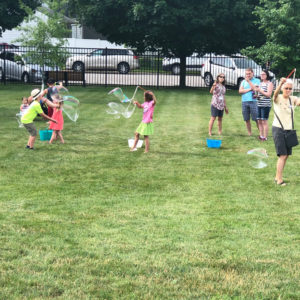 “We’ve really enjoyed watching it grow over the years,” says Sarah Evanschwartz, as children Noah and Chavah smell the flowers and watch a few butterflies float by.

“The kids really enjoy it,” she says.

As the kids run and play, nearby volunteers pull a few stubborn weeds, prune the vegetation and water some of the new plantings.

Sharon Taylor has lived in Clear Lake for seven years and has been coming to volunteer at the Gardens most of that time.

“I like being outside, and it’s warm, and you get to work with lots of different plant material and meet lots of people when you come here,” she says.

Pulling weeds isn’t supposed to be fun, but for volunteers it seems to be a relaxing way to spend the morning.

Back at the table with Sorenson and Moran, Alice Blomstrom is a veteran volunteer looking for new ways to help after some arthritic joints have convinced her to slow down a bit.

“I had been helping with the weeding, but I can’t do that anymore, so I will find my niche here,” she says.

“I came to purchase a couple bouquets of flowers and just to enjoy the peace and quiet and beauty of the Gardens,” she adds. “It’s a wonderful attraction for Clear Lake.”

It’s kind of calming and stress relieving to come here,” she says.

New volunteers as well as benefactors are always welcome and needed. Visit  the website or call 641-357-0700. As a privately-funded, free, public garden, assistance is always needed and very much appreciated.

To Dull, and all the volunteers like her, there’s no doubt that every drop of sweat is well worth the effort.

Let your mind wander back again to those stories of the old Central School, which served originally as both the junior high and high school. Think of the first dates, the couples who became life-long sweethearts.